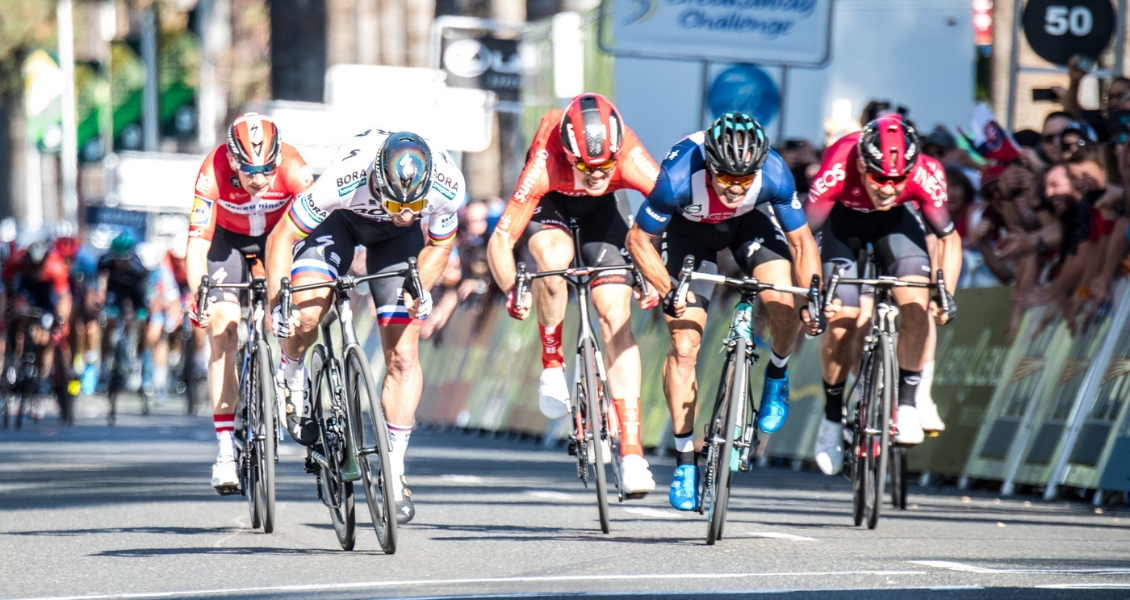 The goal of the young riders competing for the USA National Team in the Amgen Tour of California is to gain experience racing against the world's finest. Team members Travis McCabe and Tyler Stites were among the best Sunday during the opening day of the race’s 14th edition.

Sagan lunged and crossed the line in 3 hours, 14 minutes and 10 seconds. Maximilian Walscheid (Team Sunweb) of Germany was third in the 88.9-mile trek from near the State Capitol into the Sacramento Delta and back.

"I knew the sprint has a slightly false flat into a headwind," said McCabe, who took a line to Sagan’s left in the last 50 meters and gained on the stage winner. "I waited until I needed to go. I can't be happier. Losing to a world champion is not a bad day."

"It's pretty surprising; I mean honestly I am not a pure sprinter," said McCabe. "I was looking at more stages like 3 and 4, I believe, to Morro Bay. And so coming here and getting on the podium. It's Mother's Day. It's my birthday. I got some cake at the team presentation this morning. I think that actually gave me a little extra speed in the legs."

Sagan, who claimed his 17th career Tour of California stage win in his 10th participation in the event, assumed the race lead with his 10-second finish bonus. McCabe is second overall, trailing by four seconds after a six-second bonus. Walscheid is third in the general classification, trailing by six seconds. It was Sagan's first win since the Tour Down in Australia in January.

Stites (Aevolo), the 21-year-old from Tucson, Ariz., rode at the front of the stage from the opening mile with three competitors. Stites’ rivals shrunk to two, then one. He rode for just under three hours before sitting up to preserve his energy. He was quickly absorbed by the peloton.

"It means a lot for me and for USA Cycling," said Stites, who finished 31st in the stage, four seconds behind. "I am just trying to make the most of it. I made the break and had a great day."

In a planned move, according to team manager Michael Sayers, Stites pedaled to the front with Laurens De Vreese (Astana) of Belgium, Michael Schar (CCC Team) of Switzerland and Frenchmen Charles Planet (Novo Nordisk). Schar and then De Vresse were individually dropped from the lead foursome on the flat route.

Stites and Planet then rode together before the young American was instructed by his team to taper his effort with six days of the race remaining. Planet rode alone at the front for several miles but also was absorbed and eventually finished last in the stage, 5 minutes and 31 seconds behind.

"Travis had a career-defining day today," said Sayers. "I think he was the fastest guy in the race, but Peter may be the best rider in the world. Travis is  rider full of class."

McCabe is the road captain of the seven-rider USA National Team. USA Cycling is competing with a squad in the event for the first time since 2007. The team feature six riders between ages 21-24 and McCabe.

"For me, I have to ride with a chip on my shoulder,” McCabe said. "I think that's how all of the USA Cycling riders ride. We give the others respect, but we also demand respect as well. We are here and we are here doing everything we can to get a result.

"Some of the guys are young, but for me it's just not being afraid to push back. I think some of the time, other teams might think a little less of us. Giving a head butt or a shoulder respectfully, to do what you need to do to keep a wheel or whatever it takes to hold your position. It gets you in a perfect position of a podium like today."

Although he was gaining on Sagan in the waning meters, McCabe didn't express any disappointment.

“I came with speed and I came in two wheels back from Peter and I’m happy with second,” he said. “It’s a great birthday present to me. I am used to floating in the field and it worked out. As they say, it’s not where you start a sprint, it’s where you finish.

Stites was equally pleased and his performance was praised by Sayers.

"Tyler is one of our bright up-and-coming riders," Sayers said. "He put himself in a position to lead the young rider classification by capitalizing on his strengths. He's a shining example of that taking a risk will pay off. He is a rider of my own heart.”

This year’s National Team presence at the Tour of California was made possible with the additional support of JustBARE Chicken and VolvoUSA.