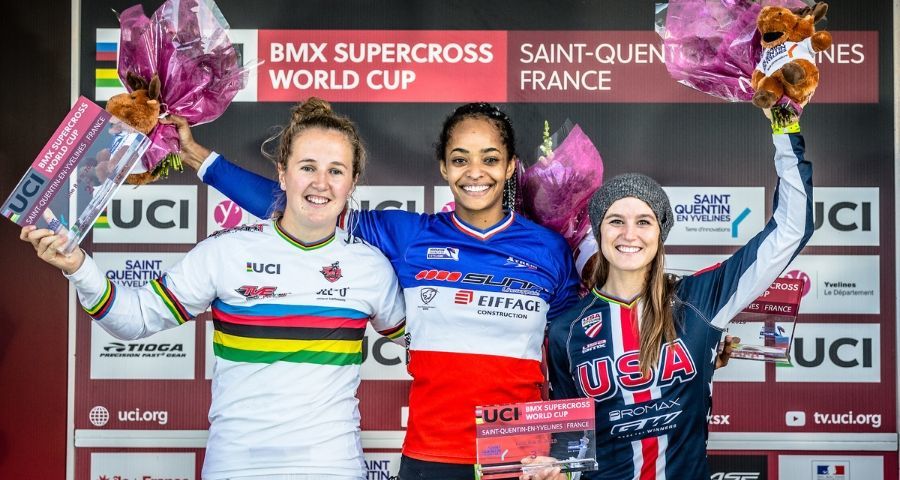 At this weekend’s BMX Racing World Cups Round 5 and 6 in Saint-Quentin-en-Yvelines, France Alise Willoughby claimed her third and fourth World Cup medals for the season. On the first day, Willougby claimed second in Round 5 with teammate Felicia Stancil just shy of the podium in fourth. The following day Willoughby raced to a third place finish with Stancil in eighth.

“Both [Willoughby and Stancil] were racing excellently all weekend,” said Jaime Staff, High Performance Director for BMX,  “Alise hardly put a foot wrong all weekend but one mistake in the final on Saturday allowed current world champion Laura Smulders the opportunity to pounce. On Sunday Alise had the hole shot again, only to be passed by the home town favorite Manon Valentino in the first turn. Some good racing between Alise, Manon and Laura followed but Alise had to settle for 3rd at the finish line.”

Currently, Willoughby is ranked second in the World Cup standings and the U.S. is ranked second as a Nation as well as first in Olympic Qualification points on the Women’s side. On the Men’s side, the U.S. is ranked third in both World Cup Standings and Olympic Qualification points behind France and the Netherlands. Last weekend’s races marked the final World Cup before the 2019 UCI BMX Racing World Championships which will take place the 23-27 of July in Heusden-Zolder, Belgium.

Back in the states, U.S. athletes were heating up on the road, track and trails.

In Missioula, Mont. Keegan Swenson came back from racing in Europe to sweep the Men’s races winning the Marathon and Time Trial by over two minutes each at the Missoula Mountain Bike Cup ProXCT race. Chloe Woodruff also won the Marathon Mountain bike race and placed second overall in the event. Juniors Riley Amos and Madigan Munro won the junior race after an impressive block of racing with the National Team in Canada.

The block of UCI racing at the Valley Preferred Cycling Center in Trexlertown, Penn. Started off with fireworks both on the track and in the air this weekend with the Festival of Speed. As the best track cyclists from around the world flocked to Trexlertown, several American racers shined as track records were shattered. On the first day, James Mellen won the Sprint and set the track record, being the first rider in history to go under 10 seconds on the Velodrome, known as the concrete crater to the community.

Several juniors also competed in the junior races winning and setting records. Ian Oelrich won Junior Scratch Race while Homare Yamashita age 13, set a new National Record in the 2K for Junior Women and Jean-Luc Contant-Galitello record in the Junior Men’s Flying Lap, shattering the old record of 19.22 set in 1989 by riding a time of 18.679.

Visit USACycling.org for more information on the athletes, events and membership programs, and follow @USACycling across all channels for the latest on Team USA.