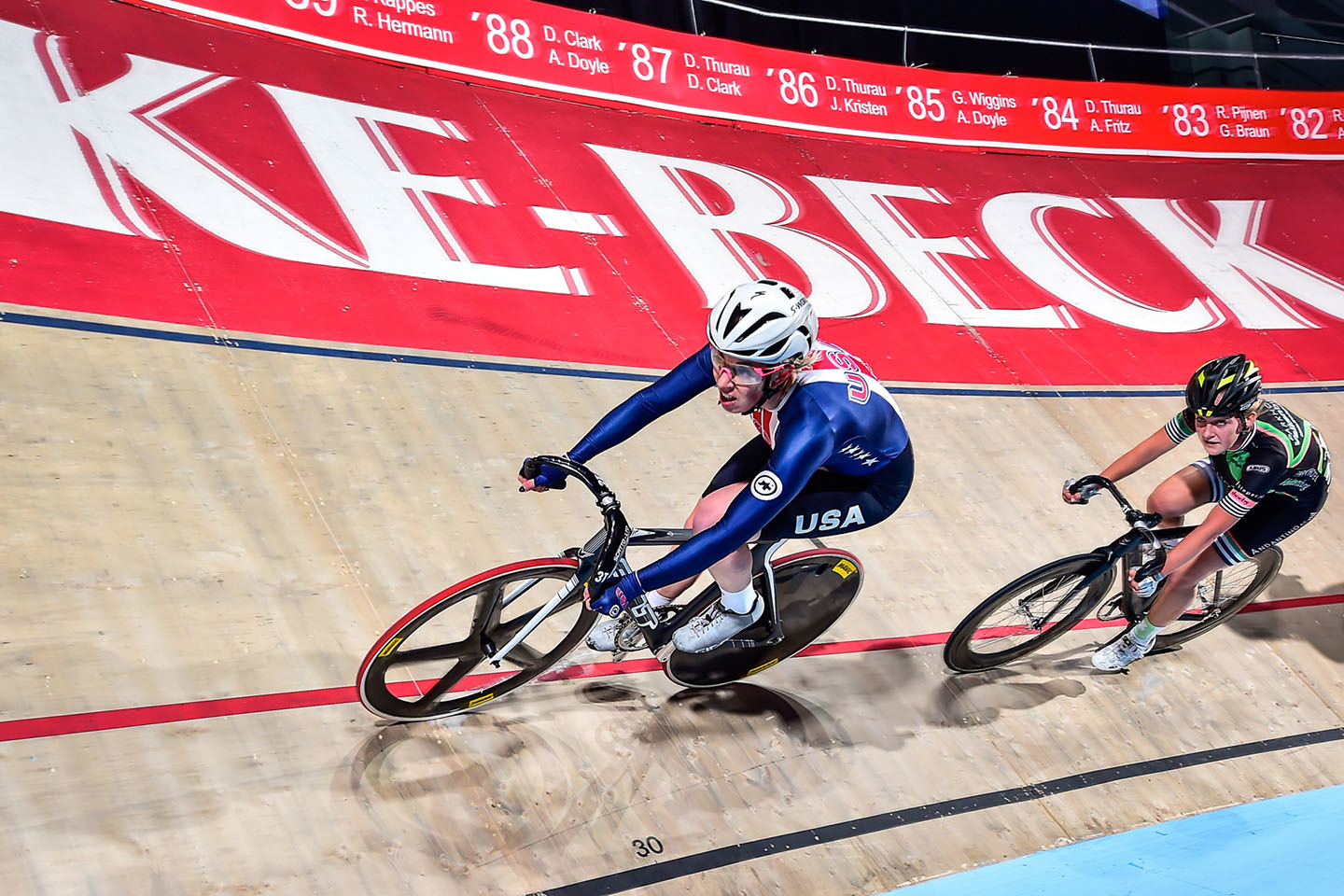 Athlete Spotlight: Christina Birch Comes into Her Own

Every cyclist has a different story on how they got into cycling. Christina Birch, who will be competing this weekend at the USA Cycling Elite Track National Championships at the VELO Sports Center in Carson, Calif, found track cycling almost accidentally.

Birch started cycling in 2009 casually when she decided to attend an introduction to road racing clinic but got more serious about the sport while she was a doctoral student at Massachusetts Institute of Technology in Boston and began racing with the MIT Cycling Team. From there she began competing, with Cyclocross as her primary discipline.

“I actually went to the Northeast Velodrome in New Hampshire for the first time in 2012, it was about an hour outside of Boston, but I only went to help me with my ‘cross training,” said Birch of the first time she rode on the track.

Birch would go on to represent MIT at the 2012 USA Cycling Collegiate National Championships in Frisco, Calif., marking her first time riding on a 250 meter track. Unfortunately, later that year the Northeast Velodrome closed, so she stopped riding on the track and went back to focusing on Cyclocross until 2015.

In 2015 she graduated MIT with a PHD in Biological Engineering and made the move from Boston to California, where she took a position as a professor in the Bioengineering Department at U.C. Riverside. Around the same time, some of her friends suggested she try track cycling again.

“My goal was always to represent my country on the international stage.  My cycling mentors knew my goals and they also knew that I was extremely analytical, which is perfect for track cycling and encouraged me to give it another go, so I decided to see what would happen if I solely focused on one discipline,” explained Birch. “I loved the chaos of cyclocross, and track has a different kind of chaos. It’s much more of a three dimensional playing field than people realize.”

“Track cycling keeps me honest,” adds Birch, “With Cyclocross and other disciplines you can supplement with good handling skills, and on the track you can’t hide your fitness. You either have it or you don’t”

While teaching at UC Riverside, she said she learned a lot about hustle.

“Everyone is trying to have a work-life balance. Riverside was 71 miles each way from the track so, I would teach Tuesday to Thursday all day, work out, sleep on an air mattress in my office and then drive to the track on Thursday evening for the weekend,” said Birch.

“I would do roller workouts in the parking lots. I got a lot of weird looks from students,” she laughed, “You just make it work.”

After that first year, she accepted a position at CalTech to be closer to the track and continued to work towards her dream of donning Red, White, and Blue. That dream came true in early 2018 when she competed in her first UCI World Cup in Minsk, Belarus, placing 10th in both the Points Race and Scratch Race and earning herself a spot on the roster for USA Cycling for the UCI Track Cycling World Championships in Apeldoorn, Netherlands in the Scratch Race.

“You can’t replicate the feeling you get from lining up in Red, White and Blue,” said Birch of the experience.

Part of representing Team USA at the World Championships included spending a week prior to the competition at a training camp with the rest of the Worlds squad in Majorca, Spain and she has since spent time with them back at the Olympic Training Center in Colorado Springs for training and Talent ID camps. Birch was also asked to be a part of the USA Cycling Women’s Team at the Amgen Tour of California in early May.

“I haven’t felt this level of camaraderie since being on my collegiate team,” said Birch when asked about her relationship with her fellow athletes, “I think the common goal of wanting to be the best catalyzes so much growth. I take something positive away from every single person on the team.”

June 15, 2018 marked another significant day in Birch’s career. At the end of her teaching semester, she decided to take a sabbatical to focus on traveling and racing more. Recently she spent time at the Valley Preferred Cycling Center in Breinigsville, Penn. to race in the World Series of Bicycling*, a series of Category 1 and 2 races, as well as traveling to Tokyo to compete in the Japan Nation’s Cup where she won the Madison with teammate Jennifer Valente at the same velodrome in which the Olympics will be held in 2020. These races are important in improving an athlete’s world ranking so that they qualify for World Cups.

“Racing in Japan was great. It was informative to experience the velodrome conditions and learn how the heat and humidity affected my body,” Birch explained. “That was also the first time I rode the Madison with an American at that level. It was great riding with Jennifer and I’m looking forward to riding with her at Nationals. When you really start developing a rapport with your partner, you can anticipate each other’s moves.”

“I’m a different rider than last year,” Birch continues as she begins to talk about her goals, “It’s important not to get overwhelmed by the big goals and instead breaking them down to smaller goals you can step towards. For me, that next goal is nationals. It’s important for getting me to the Pan American Championships. I’m working towards the goal of racing the Team Pursuit at a World Cup this season as well. It’s cool to see four individual efforts come together to produce a team result.”

At Nationals, Birch will be competing in the Points Race, Madison, Omnium, and Team Pursuit. She is also the reigning U.S. National Champion in the Individual Pursuit.

When asked if she has advice for others who are working towards their aspirations, she said “Keep moving forward. Everyone’s path looks dramatically different but, as long as you’re still moving towards those big goals, that’s what matters.” 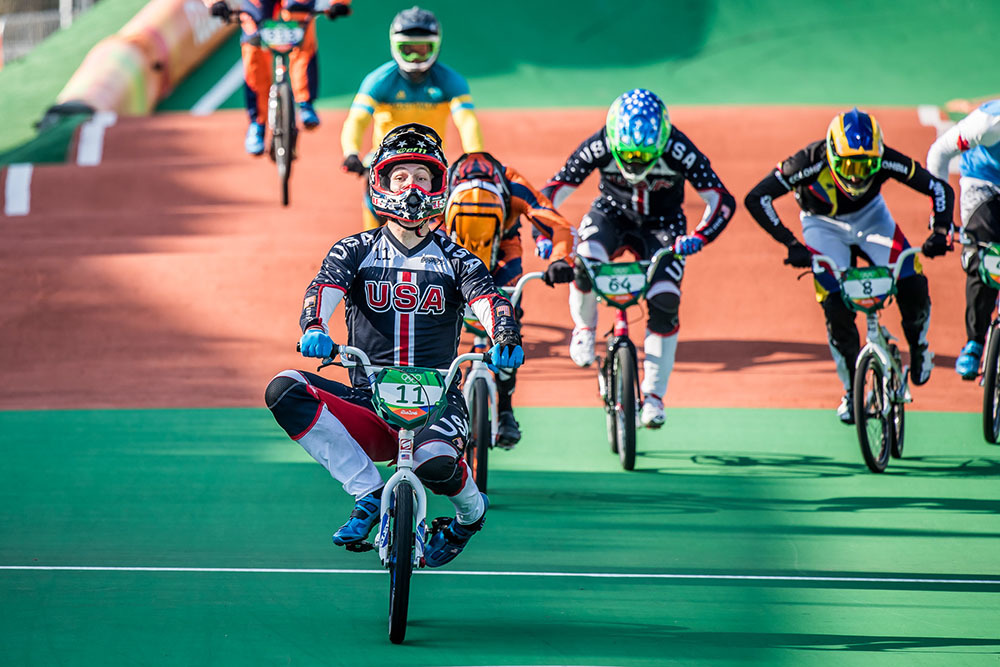