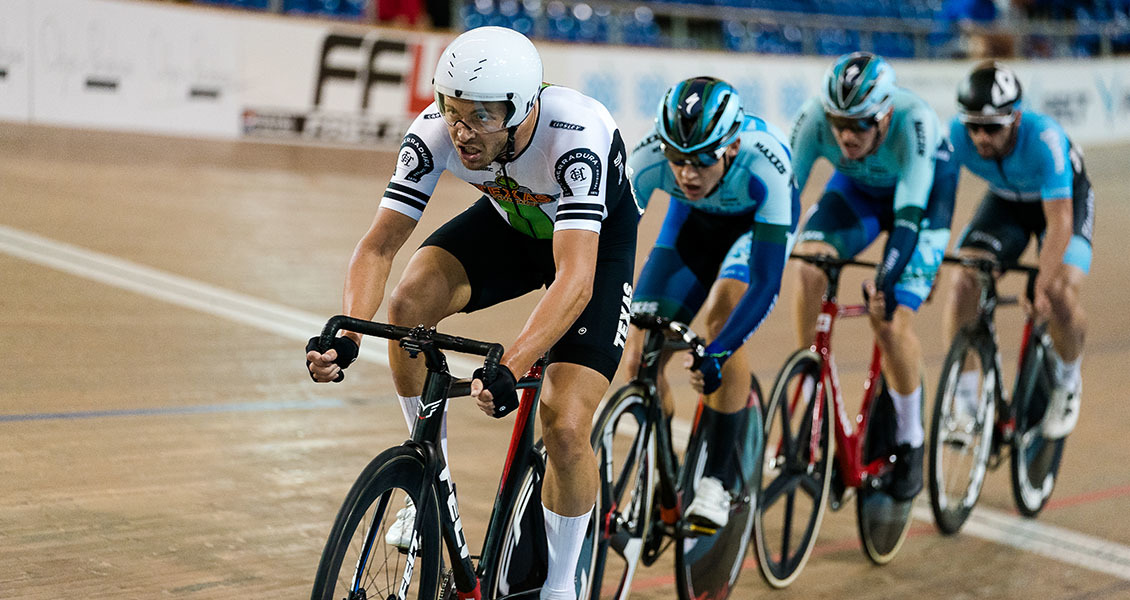 Day three of the 2019 USA Cycling Junior, Elite, & Para-cycling National Championships awarded eight Stars-and-Stripes jerseys on the Fourth of July. Titles were awarded in the first elite events of the event for team pursuit, team sprint, and scratch race. Junior titles were awarded for the men and women’s madison.

For the Elite Men’s Scratch Race, it would be Eric Young (Boulder, Colo.; Elevate-KHS Pro Cycling) would win after he and four other races lapped the field midway through the race.

“It was awesome, it was super fun. The last time I did track nationals was in 2010, I think, when I was an amateur. I raced the scratch then and did not get first, so it’s fun. I’ve been wanting to come to Track Nationals for a while, but because of road [team] commitments, I haven’t been able to. Today’s was super awesome and a great start to the week. It’s going to be a super fun week”, Young said about his win.

Colby Lange (Edwards, Colo.; Wildlife Generation p/b Maxxis) and Danny Summerhill (Centennial, Colo.; Texas Roadhouse Cycling Team) were among the four riders with Young when he lapped the field. They would place second and third respectively.

Jastrab would partner with Zoe Ta-Perez (Orange, Calif.; LUX Cycling Team) for the Junior Women’s Madison event. Together they would work to lap the field and earn a total of 47 points to defend their title in this event. Melton 20, the team of Olivia Cummins (Ft. Collins, Colo.; Melton Design Build/Cari Higgins Real Estate Cycling Team) and Makayla MacPherson (Corona, Calif.; Sho-Air TWENTY20 Development) gave Jastrab and Ta-Perez a run for their money, winning all but two of the sprints for points. They would earn 29 points and the silver medal. The last step of the podium would go to Paula Che (Torrance, Calif.; iCademy) and Chloe Patrick (Carson, Calif.; Team Velosport Junior & U23 Development - Rock n Road Cyclery).

Team Chicharrones, Ashton Lambie (Lincoln, Neb.; HUUB Wattbike), Shane Kline (Bally, Pa.), Grant Koontz (Spring, Texas), and Lange would put in two impressive times in their rounds of the Elite Men’s Team Pursuit, which would be good enough to get them the gold medal. They would set the fastest time of the day for the event with a 4:03.946 in their final ride. Not going down without a fight the Texas Roadhouse Cycling Team, John Croom (Rock Hill, SC), Adrian Hegyvary (Asheville, N.C.), Daniel Holloway (Boulder, Colo.), and Summerhill would place second with a time of 4:08.307.

The Star Track Racing team of Sophia Shuhay (New Tripoli, Pa.) and Madalyn Godby (Louisville, Colo.) would sped to the Elite Women’s Team Sprint title. They would be the only team in the competition to post a sub 35-second time, with a 34.789 and a 34.858. The team of Kayla Hankins (Scottsdale, Ariz.; LUX Cycling Team) and Keely Kortman (Tustin, Calif.; Performance Cycle Coaching) would take second with their finals time of 36.536.

In the 11-12 Juniors Vanessa Jaramillo (Colorado Springs, Colo.; Front Rangers Junior Cycling) would win the first of three events for the women, giving her the early lead in the 11-12 Women’s Omnium. Enzo Edmonds (Brooklyn, N.Y.; Star Track Racing), the 11-12 criterium champion in Hagerstown, Md., went on to add another gold to his collection, by taking the 11-12 men’s scratch race.  Like Jaramillo, he now leads the men’s omnium.