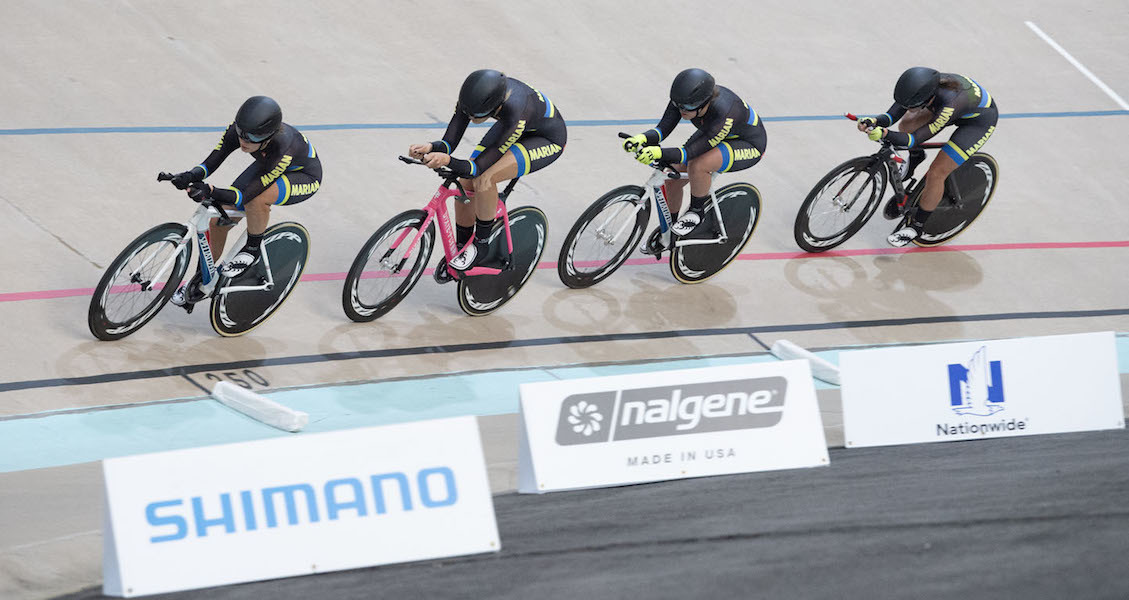 COLORADO SPRINGS, COLO.— The 2018 USA Cycling Collegiate Track National Championships began today at the U.S. Olympic Training Center Velodrome. Today’s racing saw the first jersey of the competition awarded in the women’s team pursuit competition, as well as the start of the sprint tournaments and the men’s points race qualifiers.

The Marian University women’s team pursuit squad of Alijah Beatty (Washington, Iowa), Birgit Morris (Grand Junction, Colo.), Laurel Rathbun (Monument, Colo.) and Emma Swartz (Madison, Wisc.) continued the school’s dominance in the event. In the ten-year history of the women’s team pursuit event at collegiate track national championships, no other school has been able to unseat Marian from the top step of the podium. This year’s squad clocked a time of 4:57.812, which was almost 20 seconds faster than last year’s winning time, of which Beatty and Rathbun were members of.

Said Beatty about their ride, “We really communicated well. If we wanted to go faster, if we wanted to stay steady, you know, I think that was a big thing. Especially on this track, because it does feel so fast. I think some of the other teams had a little bit of trouble with that. That was a big deal."

The day kicked off with the 200-meter sprint qualifying for both the women and men. From the qualifiers, the top-18 riders of each gender where entered into the sprint tournament. Today’s racing took riders through the quarterfinal round. Riders will contest the semifinal and final rounds during Friday’s evening session. On the women’s side of things, last year’s women’s sprint champion, Olivia Ray (Auckland, New Zealand/Savanah College of Art & Design – Savannah) posted the fastest qualifying time for the women, with a time of 11.877. Ray, along with Erica Allar (Demorest, Ga./Piedmont University), Hannah McDade (Tigard, Ore./Marian University) and Stephanie Nave (Erwin, Tenn./Milligan University) will advance to the semifinal round. For the men, Colorado Mesa University freshman Evan Boone (Sierra Vista, Ariz.) had the fastest qualifying time today. Boone, who is racing age 18 set a time of 10.499 seconds, that ties the Junior Men’s 17-18 national record. Joining Boone in the semifinals will be teammate Dalton Walters (Richardson, Texas) and Marian University teammates Cade Bickmore (Longmont, Colo.) and Peter Bock (Muskego, Texas).

During the evening session, points race qualifying heats were held for Friday evening’s men’s finals. The top-18 riders from each of the two heats will advance to the major finals. Nicholas McKey (Grandville, Mich./Fort Lewis College) took the first heat with a total of 43 points. Simon Lynn (Anchorage, Alaska/U.S. Air Force Academy) won the second heat with 38 points.