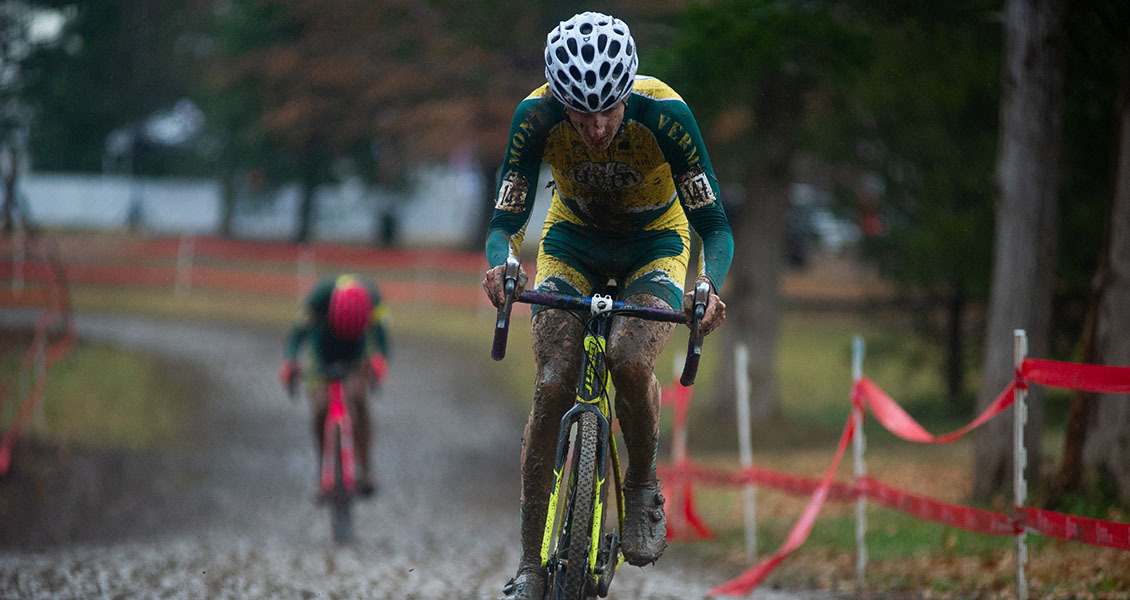 Louisville, Ky. -- Rain and muddy conditions challenged the athletes for the fourth day of racing at the USA Cycling Cyclocross National Championships 18.2 in Louisville, Ky. Two Collegiate and five Masters men’s titles were decided on Friday, as well as two Non-championship contests for men and women. Intermittent morning showers were followed by afternoon rain, turning the 2.41-kilometer course at Joe Creason Park into a mud bath.

The Non-championship races in the 11-22 age groups started Friday action. Fourteen-year-old Jack Spranger (Sammamish, Wash.) rode his way to a win in the men’s event in 25 minutes, 40 seconds. For the women, 15-year-old Jennifer Mettler (Chanhassen, Minn./NorthStar Development Cycling) took the victory in 28:50.

The first Stars-and-Stripes championship jersey of the day was contested in the Masters Men 35-39 category and was captured by Greg Wittwer (Richmond, Virg./Sweet Spot Cycling) in 45:46. Witter's father Fred, a multi-time national champion, won the Masters Men 65-69 title on Tuesday.

“I decided early on the first lap I was going to run everything, just to negate frustration and it worked out,” said Wittwer, who led wire-to-wire in the six-lap event. “I've been living through my dad winning the national championships for the past 15 years, and I've literally played this moment in my head since I was probably 20, when he won his first one. And it's awesome.”

Rain started in earnest for the 40-44 age group, where defending champion Jake Wells (Avon, Colo./FORM Attainment Studio p/b IRC) battled with Molly Cameron (Portland, Ore./Point S Nokian). Wells pulled away on the final lap at the Limestone Stairs climb to cross the line for the title in a time 42:03. Cameron would take the silver medal, 33 seconds back.

The largest field of the day was the Masters Men 45-49 contest with 111 riders jockeying for position early in the five-lap race. Defending champion Adam Myerson (Dorchester, Mass./Cycle-Smart) led from the start for a three-peat victory in 46:56.

“I really, really wanted to win this race,” Myerson said. “That's not a thing that I think about normally, it's not my personality. I like wearing the jersey and I didn't want to lose it. There's a lot of fear and anxiety in that and I don't like it. Honestly, I didn't know that I had won until the last corner and it's a relief.“​

Grant Ellwood (Boulder, Colo.) of University of Colorado Boulder opened a gap on Cooper Willsey (Hinesburg, Vt.) of Furman University to win the Collegiate Men Club contest. Ellwood and Willsey escaped from the 45-rider field on the first lap, and battled it out for the next two laps.

“The start was fast. I kind of knew the guys to race and we were gunning it from the start and going for it. I got on the front to keep a high pace just because this course is going to be a war of attrition,” said Ellwood. “We had some good stuff going through the sand, where each of us would get a gap occasionally. And then I was giving everything on the descent, opened up a little gap and held it from there.”

Willsey crossed the line 50 seconds behind Ellwood to capture silver. The bronze medal went to Nicholas Lando (Ringwood, N.J.) of University of Vermont.

“I'm super stoked,” Ellwood said of winning his first Stars-and-Stripes jersey. “This is my fifth year in college, I'm not staying to win a championship but I've been close for so many years and it's just awesome to finally get one so I'm excited.”

Live streaming will begin on Saturday for afternoon races, beginning at 12:30 p.m. ET. All events on Sunday, the final day of the championships, will also be broadcast with the live stream, on USA Cycling’s YouTube channel. Sunday's events showcase Junior Men’s, youth Women’s (ages 17-22), U23 men’s, Elite Women’s, and Elite Men’s races.

Fans can follow races on all USA Cycling social channels using hashtag #CXNats. Championship and non-championship aces will be covered all week on Twitter via @USACyclingLIVE. Galleries will be posted nightly on USA Cycling’s Facebook Page.Follow your favorite athletes this week at www.livelynxresults.com. One2Go Results will provide live lap splits for every athlete every time they cross the line for all events.