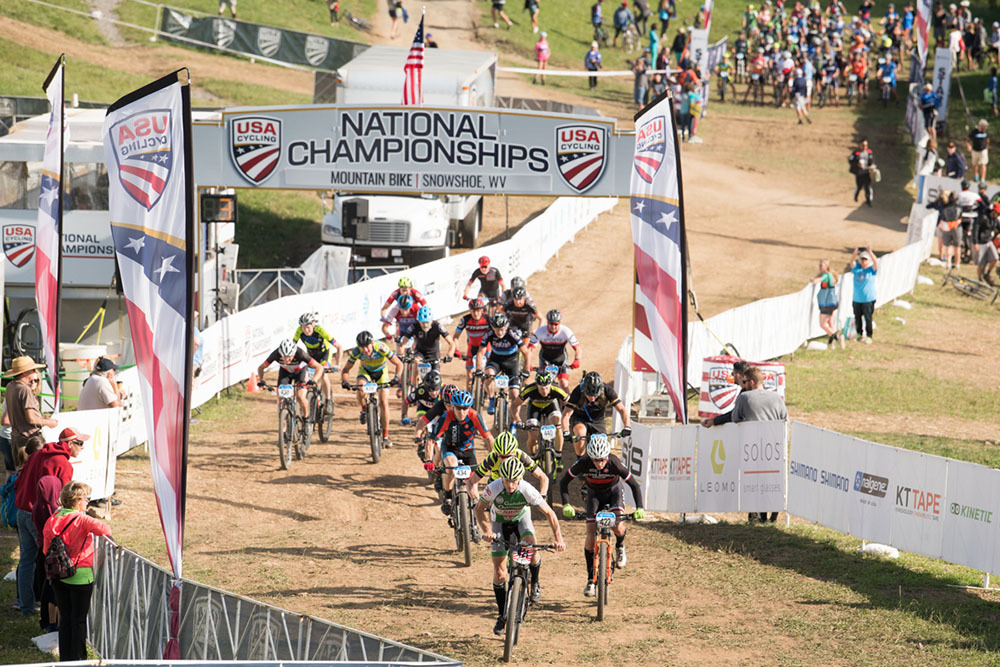 There were seven timed stages for Enduro National Championships, with all age groups and classes beginning at Noon on Thursday. The first and final stages provided the 4.5 miles of trails and the most descending for the day, with 1,500 feet of elevation drop on each section. Stage three was a short half-mile section in the Snowshoe Bike Park and 500 feet of descending. In all, the seven stages combined for 9.1 miles of trails and 5,409 feet of descending.

In the Men’s Pro/Open division, 28-year-old Seamus Powell (Round Top, N.Y./KHS Factory Racing) made his move on the second stage across the valley section to score a repeat enduro championship. He held off Jimmy Smith (Boulder, Colo./Fuji Factory Team), who improved one position from last year to finish with the silver. Carson Lange (Austin, Texas) rounded out the podium with the bronze.

“There was a lot of pressure coming into it. Seven stages in one day, anything can happen - crash, mechanicals and stuff,” said Powell. “I just worked the whole week with practice, trying to stay fresh, kept my head up and rode fast. I did what I had to do to win. I was really happy with today, I was nervous, there are a lot of fast guys, a lot of local guys, a lot of capable riders, I'm just over the moon. I'm just really happy to defend this.

“This is my fifth national title in my career. When I won Super D, I won that back to back and that was really tough. Then to win this back to back is incredible. It's insane and I love it.”

“It feels awesome. It's super cool. The jersey signifies a lot, you get to wear the Stars & Stripes for the next year,” said first-year pro Murdock. “It’s totally different than many of the other races that I've done, (it has) a little bit more prestige behind it because it is a national championship. For me the last two (stages) were the ones that solidified it for me. I was behind, I checked after stage four, and I was behind Cindy Abbott. I had to do a little bit of math and that's not my strong suit. I just tried to keep it upright and go as fast as I could, and it worked.”

In the 30-39 age group, Jake Fiola (Burgettstown, Penn.) captured the title for men and Kristine ContentoAngell (Bloomfield, N.J.) took the win for the women.

A pair of riders from Davis, W. Va. earned victories in the 40-49 division, Jason Cyr for the men, and Susan Haywood for the women.

Masters riders ruled the technical course for cross-country competitions on Thursday. The 4.6-mile course provided 564 feet of elevation gain, with a moss section at the northern end, before a descent across rocky, rooty sections to the finish behind The Village at Snowshoe Resort.

“It was nerve racking but it was also very exciting to be able to do it twice,” said Sheldon about defending her national title. “The pine section was very fun, but I wasn't very good at this year because it was a little bit slippier than last year. And then the climbs were good, and the rocky section was fun. It was all good.”

Two age groups in the Men’s Master competitions completed three laps of the XC course. The national title in the Master 55-59 field was captured by the Mountain State’s Gunnar Shogren (Morgantown, W.Va.), who took a dominate lead after the first lap.

“I was happy that I had a clean race and I had a great time,” said Shogren, who won a master cyclocross world championship in 2013. The win gave him a seventh USA Cycling national championship, winning three in mountain bike (age categories), three in cyclocross and one in mixed road.

“It looked like a walkaway but it really wasn’t. Don Seib and I went into the first wood section together and he was riding real aggressive. And then he flatted. I was looking back, expecting him, but who knows. I had a nice clean ride after that, but I think it would have been a really good race between us.”

A fourth day of racing continues Friday under windier and cooler conditions with junior, senior and masters cross-country, amateur downhill seeding runs, and pro dual slalom by the lake. With the record size fields for the men and women 15-16 cross country fields, the races will be split to ensure a fair and safe race for each group. The women will start at 6 p.m. for three laps, and the men will start at 7:15 p.m. for four laps.