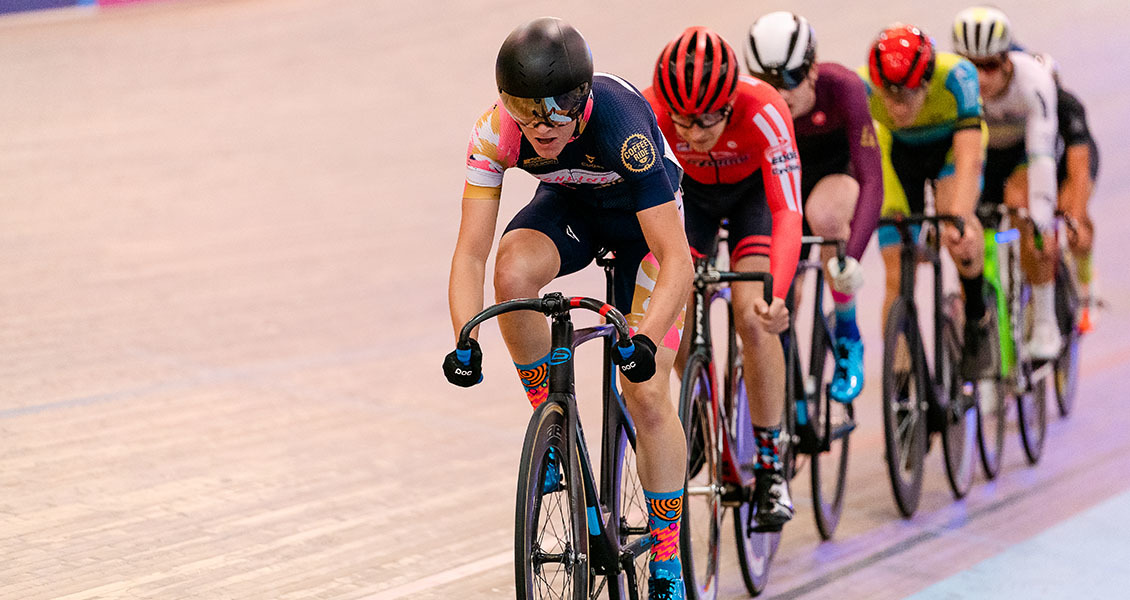 Day one of the 2019 USA Cycling Junior, Elite, and Para-cycling Track National Championships saw four titles awarded to the junior athletes at the VELO Sports Center in Carson, Calif. Racing was centered on two events, the sprints and the international omnium, for both Junior Men and Women.

The day started off with the 200-meter sprint tournament qualification rides, where JeanLuc Contant-Gallitello (Coconut Creek, Fla.) would clock 11.038 seconds, as the fastest time for the Junior Men. On the women’s side Kayla Hankins (Scottsdale, Ariz.; LUX Cycling) would set the fast time with 11.995 seconds. In the end it wasn’t speed but tactics that would win the day, as both Contant-Gallitello and Hankins would be knocked out during the sprint tournament rounds.

Sophia Shuhay (New Tripoli, Penn.; Star Track Racing), the US record holder in the 200-meter, would end up earning the stars-and-stripes for her second time in this event, repeating her win from 2018. “It feels really good. It feels… I’m really happy I could defend my title.”, said Shuhay.

On the Junior Men’s side of sprinting, Geneway Tang (Queens Village, N.Y.; Edge Cycling) and Jackson Capela (Detriot, Mich.; American Cycling League – Detroit) would push their finals match to go to a decider ride, after each winning one of the previous rides in the final. Tang would take control of the final ride early on. This move paid off, as he was able to claim victory. Tang’s Edge Cycling teammate, Owen George (Schnecksville, Penn.) earned the third step of the podium.

For endurance events, riders would compete in the International Omnium. In the Junior Women’s event, last year’s 15-16 omnium winner Megan Jastrab (Apple Valley, Calif.; Rally UHC Cycling) would be dominate in the 17-18 event, claiming top place points in all of the events within the omnium. Zoe Ta-Perez (Orange, Calif.; LUX Cycling) was close on Jastrab’s heels, earning her silver by taking second place points in every event.

Talking about winning the omnium, “It was a crazy race. I went out there and really raced my own race. I took it to them”, Moore said. “My calves were cramping for the last 40 laps, and I was deep in the box, but I got the job done.”

In second place was Ian Oelrich (San Diego, Calif.; Team Velosport Junior & U23 Development Rock N Road Cyclery). Oelrich gave Moore a run for his money. Having their final position in the race come down to the final sprint and 6 points. Rounding out the podium for this event was Eddy Huntsman (Newport Beach, Calif.; iCademy).