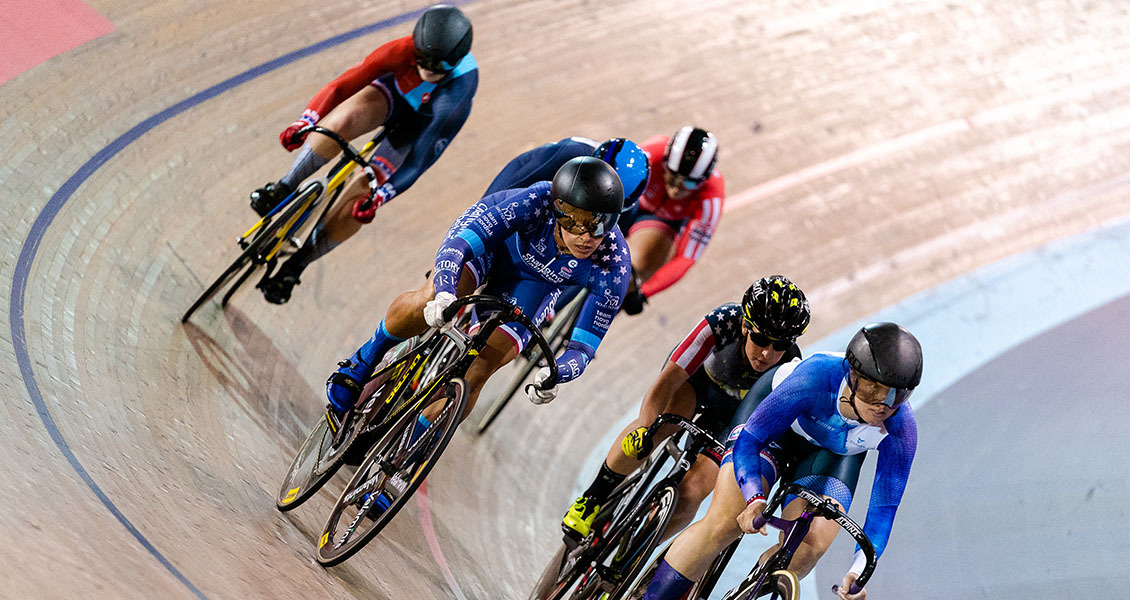 “I don’t think it’s set in. It’s pretty crazy but it’ll be really motivating for the next couple weeks as we train up for worlds”, Ta-Perez said about setting the record.

On top of her new record, Ta-Perez would also earn the national title for the Junior Women’s Individual Pursuit. Megan Jastrab (Apple Valley, Calif.; Rally UHC Cycling) would forego her ride for the gold to rest up for the Elite Women’s Madison, and would take home the silver in the pursuit. Elizabeth Stevenson (Rochester Hills, Mich.; American Cycling League – Detroit) would take home the bronze.

World record holder in the Elite Men’s Individual Pursuit, Ashton Lambie (Lincoln, Neb.; HUUB-Wattbike), would successfully defend his title. In the qualifying rounds, Lambie would post a 4:16.862, which would set a track record for the VELO Sports Center.

Talking about defending his national title, Lambie said, “It’s nice to be able to be consistent. My first year, this was main event of the entire year, to be able to train a little bit more through this event, and really focus on worlds, and still be able to come and represent the country is a great honor.”

defend his silver medal. Croom’s teammate Danny Summerhill (Centennial, Colo.) would round out the podium.

Following her win in the Elite Women’s Sprints on Friday, Mandy Marquardt (Allentown, Pa.; Team Novo Nordisk) would claim victory in the keirin as well.

“The racing in T-town, it’s been incredible racing with the international field there. It was week after week of lots racing, bringing it up to the top level there. Racing with women from all over the world, we bring out the best in each other. Coming to this, with that momentum, was big.” Marquardt said about how she prepared for the national championships.

James Mellen (Schnecksville, Pa.; Edge Cycling) would also duplicate his efforts from Friday, and taking home another national title, this time for the Elite Men’s Keirin. Sandor Delgado (Hialeah, Fla.) would place second and Joe Christiansen (Lyons, Colo.; Star Track Racing) would round out the podium.

Jastrab and Ta-Perez would switch podium spots in the Junior Women’s Scratch Race, with Jastrab on the top stop this time. Stevenson would add another Bronze to her collection of hardware she garnered this week.