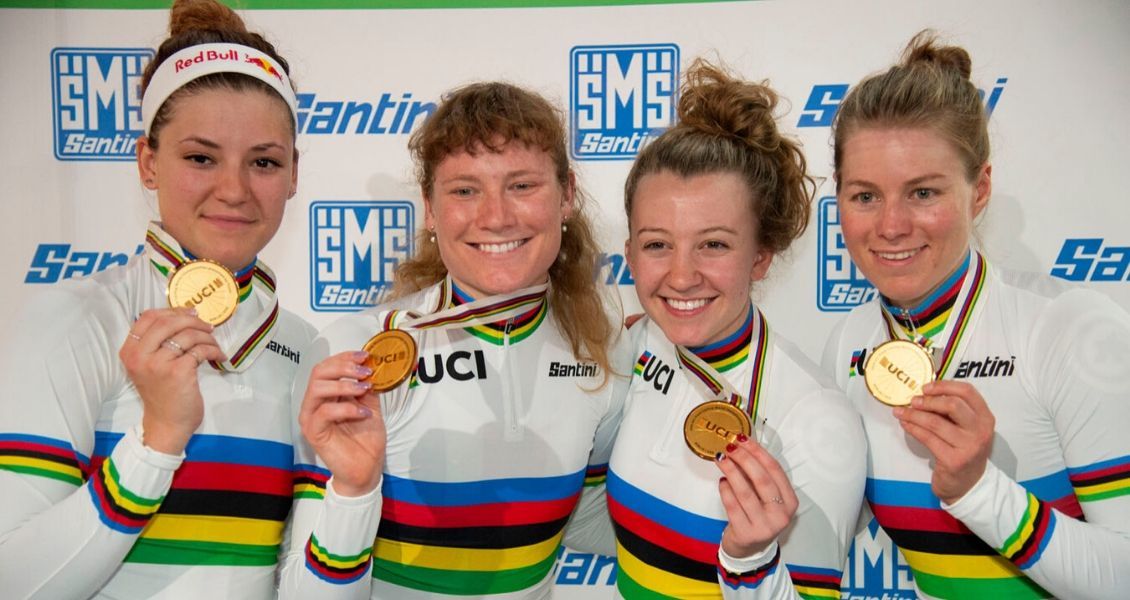 The Women’s Team Pursuit wins the coveted Rainbow Jersey in Berlin. Adrian Hegyvary has his best finish at a World Championship, finishing sixth in the Men’s Scratch Race.

Having qualified first yesterday, the team pursuit squad began the evening session racing against New Zealand in the final heat of the Women’s Team Pursuit Semifinals. They stopped the clock at 4:11.634, 2.249 seconds ahead of the Kiwis.

“I’m proud of what this team accomplished tonight.”, said Gary Sutton, USA Cycling’s Head Coach, Women’s Track Endurance. “They pulled together and rode really well, like I knew they could. This is the starting point for Tokyo and our plan is to only go up from here.”

Adrian Hegyvary (Asheville, N.C.; Texas Roadhouse Cycling Team) took to the track for the Men’s Scratch Race. He would start the race conserving energy and watching other riders make moves, and tested the waters himself to see other riders’ reactions. With one third of the race remaining Hegyvary made his move going off the front of the main field. He worked with a group of eight other riders to bridge across and take a lap with one lap remaining, ensuring him a top placing. Three of the riders from the break would drive right through the field, while Hegyvary, Matthew Walls of GBR, and Roy Effting of NED would decide places four through six by a bike throw.

Earlier in the day Madalyn Godby (Lousiville, Colo.) and Mandy Marquardt (Allentown, Penn.; Team Novo Nordisk) contested the Women’s Sprints. Godby would ride first in the seventh heat. She would stop the clock at 10.855 seconds, her best time at sea-level this season. Marquardt rode in the 21st heat, and finished in a time of 10.989 seconds. Ultimately Godby would qualify in 25th position and advance out to the first round of competition. She would ride against Laurin van Reissen of NED, who qualified eighth, in her first ride, and would ultimately be knocked out of competition.

Tomorrow Valente takes on her signature event with the Women’s Omnium, to see if she can replicate her success at the last World Cup and take home a rainbow jersey.  Ashton Lambie (Lincoln, Neb.) races the Men’s Individual Pursuit, where he was the world recorder holder for over a year. Daniel Holloway (Boulder, Colo.; Texas Roadhouse Cycling Team) will take on the Men’s Points Race in the evening session.

For more about the 2020 UCI Track World Championships, please visit the event website at https://www.trackcycling-berlin.com/. The event schedule can be found here. Start lists and live timing can be found here.

All evening sessions will be livestreamed on NBC Sports as part of the Gold Package. Below is an approximate schedule of times and events in the broadcasts.

Visit USACycling.org for more information on the athletes, events and membership programs, and follow @USACycling across all channels for the latest on Team USA.