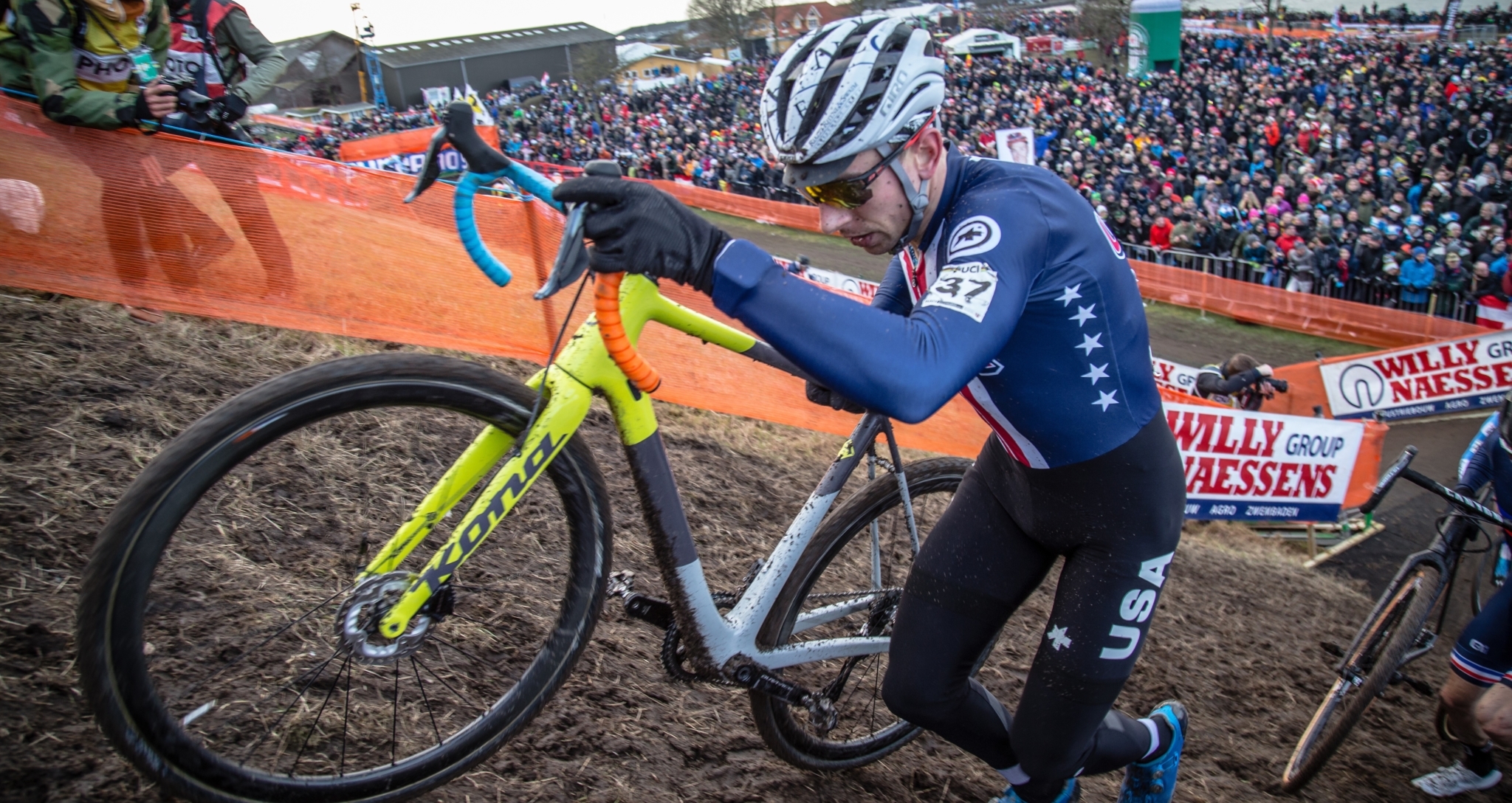 We're all keeping an eye on Werner fighting for the top of the ProCX standings this year. Going into Nationals as one of the favorites, we talked to Kerry about his strive to the top.

Kerry Werner, 28, has been giving it his all on the racing scene for years now. He’s finally starting to see the results he’s been working so hard for. With a bronze at the Pan-American Championships and several wins already under his belt, this year he is a force to be reckoned with fighting for the lead in the ProCX standings. Following Cyclocross Worlds, he started racking up the base miles with the BC Bike Race, Pisgah Stage Race, and a White Rim bike-packing trip. Last year was even a big year for him, marrying cyclocross racer Emily Shields, and starting on a new team with Kona Maxxis Shimano.

You’ve had quite the base training this year with BCBR, Pisgah Stage race, and the White Rim. What’s the reasoning behind these big rides?

Simple. Fun! I love riding bikes. It’s not always about racing for me. I love racing because it gives me direction, something to work towards and quells a desire to compete and push my limits. However, if I could be paid to do awesome adventures and fun bike rides I would do that too. Big days on the bike, point to point rides, new places, new variations on rides, those are things I think of when I get to Europe and have way too much time on my hands. I plan out big ideas for the spring and summer.

With your relationship with Kona starting in 2016, how did the Kona Maxxis Shimano team come to be?

Kona quite literally saved my racing career. After Nationals in Asheville I was dropped from the “Raleigh-Clement” team and hustling hard for a spot on a new team, any team. I got wind that Barry Wicks was putting feelers out. I head emailed him a few times but nothing solid. Then a friend who was working with Raleigh moved to Kona. He was my in. I started emailing and within a matter of 2-3 months I had a budget approved, a schedule down, and I was motivated to show them that they made the right decision.

How’s life in North Carolina with Emily and the family beagle, Sherman?

Emily and I got married in June of 2018. There was no big ah-ha! Moment when I decided I was going to marry her. My decision spurred over the previous 7 years, a culmination of all the fun we have had and how I couldn’t imagine adventures/life without her. I was invited to attend the Kona 2018 product launch and I was driving a new CX team vehicle back to the east coast from WA. She willingly obliged to acompany me on the way back east when I made plans to stop in Colorado. I called my friend Russell Finsterwald and told him I was going to ask Emily to marry me and I wanted to do it on the top of a 14er and he needed to help me plan the trip/be there to take a photo of the moment. We settled on a three peak trip, Mount Sherman (go figure), Mount Massive, and La Plata. We knocked Mount Sherman off first, it was an easy hike maybe 2 hrs round trip. Then the next day we camped at the base of Mount Massive and conquered it. I asked Emily at the top of the peak if she would marry me while Russell stood on ledge 100yds away and took photos. I failed to drop down on one knee so the photos just look like we were chatting, but she said yes! In hindsight I am glad I asked her on mount massive because the next day we camped at the base of La Plata and we took the south route up. It took 9hrs and we scrambled for 90% of it. She was not stoked and wanting to quit. She would’ve likely quit me if I asked her at the top especially after she saw the east route had a hammered in walking path to the summit.

Seeing the type of athlete support that the MudFund is providing to younger athletes in cyclocross, how do you think this will impact the future of the sport?

Development is the future. Cyclocross is still too small in the US and the US is just too big. It is going to take a lot more than just exposing the best juniors in the country to overseas racing. Granted, these opportunities are not for naught. They expose those with a high level of drive to the next level, which in my case is what it took for me to get my act together and start taking things seriously. Euro’s are so good because they grow up racing against the best of the best, every weekend, and they never have to drive more than 2hrs to do it. In America, the best juniors race the best of the best one race a year, at nationals. They are forced to race against older category racers to get competition, which is just not the same. This year, with the emergence of the UCI juniors races there was been a big uptick in junior participation. It’s been really cool to see juniors from different regions converging on races they normally wouldn’t go to in order to chase points and fight for glory outside of their local series.

How has the battle been going back-and-forth with Curtis White this season?

It’s awesome. Curtis is a great guy, one of the nicest people I have ever met, on or off the bike. We are similarly matched in racing. What he lacks in skill I make up for and what I lack in fitness he makes up for. I can pretty much plan on our battles coming down to the last lap and the win is course specific.

Is there any pressure going into Nationals as one of the favorites?

For sure. I want to win. Winning comes with pressure, especially when I have been having a consistently good season. People hold your result in high regard and place expectations on you. I try not to internalize that and focus on my own goals. I try to take it one week at a time and keep nationals in the back of my mind. Though, I still sit around and think about it. I play different scenarios over in my head and often find my heart rate spiked with the thought of contending a sprint finish for the stars and stripes.

What does the rest of the season look like for you?

I have laid my schedule out for everyone to see. I have no secrets. I am vying for the ProCX win. After Pan Ams i had Supercross, Hendersonville, then hopefully two weekends off (if I need to race ruts and guts for ProCX points I will), Nationals December 15th. We leave for Europe on the 16th and we don’t come back until February 18th.

Any big plans for next year?

As of now I have some cool adventures in mind. I am planning on taking a bigger break immediately after CX season. My first targeted race back will likely be Transylvania Epic. I hope to get into BCBR again as I have really liked that build the last two years. Other than that, I plan on bikepacking, Moto trips, and trying not to travel/spread myself too thin chasing races.

Visit USACycling.org for more information on the athletes, events, and membership programs, and follow @USACycling across all channels for the latest on Team USA.