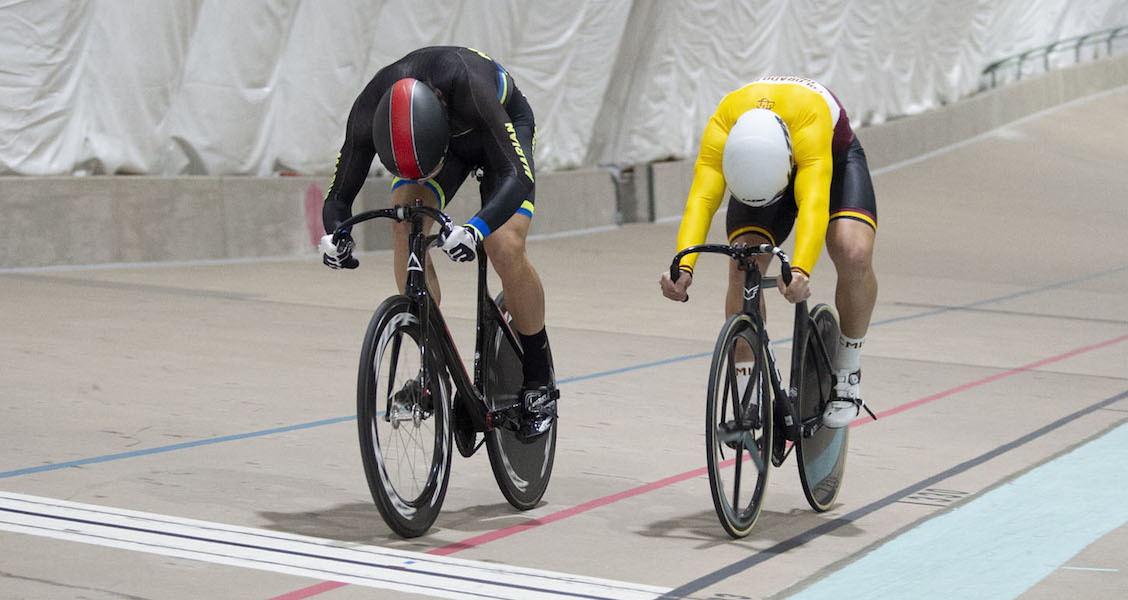 Action kicked off Friday morning with the individual pursuits. In the men’s four-kilometer contest, times were blisteringly fast, with the gold and silver medalists stopping the clock under four-and-a-half minutes. Noah Granigan (Cape May Court House, N.J./University of Colorado - Boulder) took the top stop of the podium with a time of 4:27.590. Cade Bickmore (Longmont, Colo./Marian University) set the silver standard with his time of 4:28.467. Hayden Strong (Invercargill, NZL/Marian University) came in third with a time of 4:32.321.

In the women’s three-kilometer pursuit, former junior national champion in this event Alijah Beatty (Washington, Iowa/Marian University) won the stars-and-stripes jersey with a time of 3:45.463. Last year’s champion, Erica Allar (Demorest, Ga./Piedmont College), was on the second step of the podium this year with her time of 3:48.027. Laurel Rathbun (Monument, Colo./Marian University) rounded out the podium with a time of 3:53.194.

When the evening session rolled around, Beatty doubled up on her winnings by claiming the women’s points race title with 24 points. Colorado Mesa University teammates Dafne Theroux Izquierdo (Quebec, CAN) and Natalia Franco (Medellin, COL) placed second and third respectively.

Due to the size of the men’s field for the point race, racing began on Thursday night with qualification heats for Friday finals. The top-36 riders started the final, and it was a Battle Royale for the win. In the end, James Hilyer (Durango, Colo./Fort Lewis College) was able to acquire 30 points and claim the title. Kent Ross (Portland, Ore./University of Oregon) took home the silver, and Marian’s Strong earned himself his second bronze of the day.

Closing out the evening session was the conclusion of the two-day sprint tournament. The top-four riders of both genders began the evening session in the semifinal round that determined which riders would be racing for gold and bronze. In the women’s competition Olivia Ray (Auckland, NZL/Savanah College of Art & Design - Savannah) and Allar battled it out for gold in a replay of last year’s gold medal sprint rides. Ray was able to win the gold in two straight rides. Said Ray about the ride, “Pretty awesome, it was cool to compete against people i did last year, and to come away with the win again just made it all the better.” Hannah McDade (Tigard, Ore./Marian University) claimed bronze in her rides against Stephanie Nave (Erwin, Tenn./Milligan College).

On the men’s sprint side, the finals for both gold and bronze came down to a third ride decider. In the gold medal matchup, Peter Bock (Muskego, Wisc./Marian University) and Evan Boone (Sierra Vista, Ariz./Colorado Mesa University) were evenly paired as neither let the other take a win by more than half a wheel length. In the end Bock was able to win the third ride and take home the gold. “It feels really good to finally score a win. [Nick] Oestreich has had the last two years running and I beat the new Junior Men 200-meter national record holder and it feels really good to see all my hard work pay off.”, said Bock about winning after three years of close competition. In the bronze medal round, Bock’s teammate, Bickmore, was able to edge out Boone’s teammate Dalton Walters (Richardson, Texas) to take the third step of the podium.

Saturday’s racing will conclude these championships, and will include men’s and women’s time trial events, scratch races, and the always entertaining Collegiate Team Sprint. You can follow the action on USA Cycling’s @usacyclinglive Twitter account as well as the @usacycling Instagram account, and follow along with others posts by using the hashtag #CollNats .